KIM VILFORT: The triumph and the tragedy

In less than two weeks the European Football Championship will begin.

It will be the turn of civilised and neutral Sweden to host them.

Europe, however, is in turmoil.

In the east, the world is changing.

The Union of Soviet Socialist Republics no longer exists.

Instead of the usual USSR, the CIS, the Commonwealth of Independent States, will participate. There are no longer any Latvians, Estonians or Lithuanians.

Nor are there any more Georgians, who had already declared themselves an autonomous and independent region from ‘big mother Russia’ two years earlier.

But there is still much more and much more pressing.

The war that has raged in the country between opposing ethnic groups and religions has crumbled a nation held together for decades by the determination and charisma of Josip Broz Tito.

On the field, the Yugoslavian national team struggled to win qualification, winning its group match with just one point ahead of Denmark.

But ‘that’ Yugoslavia is one of the strongest ever.

The Croatian players actually already exited themselves in the previous year, but the one that leaves for the European Championships in Sweden is nevertheless a great national team.

The ‘plavi’ (the blue ones) have already landed on Scandinavian soil but the pressure is enormous.

There are thousands of Croatian refugees who have arrived in Sweden and because of this, there are fears of attacks and the Swedish public security forces are engaged round the clock to protect the Yugoslav national team.

The situation then precipitates.

There is pressure from all sides (Lennart Johansson’s UEFA first and foremost) and so the worst sporting decision is reached: the Yugoslavian national team is excluded from the European Championships.

A hefty bill arrives for the Yugoslav federation from the Swedish authorities. Reason? The garrisoning and protection of the national team during the week spent in Sweden.

Not only is the Yugoslav Federation unable to pay the fine … but there are also no flights to Belgrade to allow the players to return home.

An inglorious and frankly ignoble end for a great national team and for players who certainly did not deserve such treatment.

In their place, on 1 June 1992, just nine days before the start of the competition, the Danes were called up, having finished behind Yugoslavia in their group.

The Danish players practically had their suitcases packed and ready to go on holiday.

In fact, some of them are already on holiday … and has not the slightest intention of returning to play football again after a long and successful season.

He is Michael Laudrup, the strongest Danish footballer of the time, who after disagreements with his national team coach, Richard Møller Nielsen, has no intention of interrupting his coveted holiday to return to play with his national team, even if it is the finals of a European Championship.

“I have just won a European Cup and a championship. As much as I love my country, it doesn’t make sense to give up a bit of rest to go and play three games, knowing full well that after those we would return home.”

For everyone else, however, it was a very small sacrifice.

Playing in the finals of such an important competition does not happen every day, especially after the disappointment of not participating in Italia ’90 two years earlier.

There is someone, however, who is experiencing a very different situation from his teammates.

His name is Kim Vilfort. He is a giant of one hundred and ninety centimetres. He plays half-back, is indispensable in that national team because of his strength, his tactical intelligence and his humility.

And he has a daughter who is dying.

His eight-year-old daughter Line is in a hospital bed.

She is suffering from a severe form of leukaemia.

For him it is not about giving up a holiday.

It’s about getting away from his little girl … to go and play football.

It is a difficult choice, where heart and brain cannot help but be at odds.

His national teammates, his friends, his own family rally around him.

They support him and tell him to go.

“Kim, we play near here, in Sweden. If you were needed in a few hours you would be here, close to Line”.

Kim Vilfort, with a burden we can only try to imagine, accepts.

On the eleventh of June he takes the field against England.

Denmark holds its own.

No. The Danes are not with their heads on holiday.

In the second match they face the hosts.

This time the dam does not hold. Tomas Brolin scores the Swedish winning goal.

Vilfort is on the pitch, playing his part as always.

There is one match left, against the France of Papin, Cantona and Blanc.

A draw is enough for the French.

Things are not improving for little Line.

Vilfort asks to join the little one in Copenhagen.

Møller Nielsen gives him his blessing.

“Go Kim. But if we make a miracle come back here. We are waiting for you.”

Denmark beat Michel Platini’s France by two goals to one.

Larsen and Elstrup score, ten minutes from the end.

Denmark is in the semifinals.

Now it is the turn of the defending champions Holland.

Denmark plays the match of a lifetime.

They took the lead twice, again with Larsen, but the Netherlands always came from behind.

First with Bergkamp and then Rijkaard when there were less than five minutes left until the final whistle.

It went to penalties.

Vilfort was awarded the fourth penalty.

So far only Van Basten has missed.

If he scores after that only Christofte has to do his duty.

An insignificant thing compared to what is going on in his life.

Denmark is in the final.

Life can be wonderful and wicked.

A probably unique and unrepeatable professional moment is contrasted by a terrible personal one … the worst for a father.

Vilfort on 26 June 1992 took the field with his teammates for the final against West Germany.

All the big favourites crossed the path of the ‘Cinderella’ of the tournament.

Only the “Cinderella” is alive and well… and it’s the others who have been sent on holiday.

The Germans start off strong.

Schmeichel is in a state of grace.

It’s the 18th. It was perhaps the first time Denmark put their noses outside their defensive three-quarter. The ball comes to John Jensen, a midfielder.

One who has very little confidence with the goal.

His “torpedo” from the right corner of the area, however, went under the crossbar defended by Illgner.

Schmeichel makes a prodigious leap and removes the ball from the crossbar.

Povlsen wins an aerial duel in the middle of the pitch and throws the ball back towards the German area where there are, however, three German players and only one Danish one.

The Danish one is him.

He still has the energy to pounce on that ball.

He gets there before Helmer and Brehme, who, however, close the way to the goal.

Vilfort makes a feint and returns with his right foot, sending the two German defenders ‘over the bar’.

Only Michael Laudrup makes such plays in Denmark.

But it can’t be him. He is in Riccione, on holiday.

Vilfort takes the ball to his left.

It’s just a metre outside the penalty area.

He shoots. His left-footed shot is not powerful, but it is of surgical precision: it kisses the post to Illgner’s left and goes into the net.

The embrace of his team-mates overwhelms him.

In that embrace there is much more than the joy of a goal, however decisive.

There is affection and gratitude for those who, like Vilfort, never stopped fighting, running and sweating along with them … despite the fact that the most important game was being played in Copenhagen, in a hospital bed.

A few weeks later Line ascended into heaven and Kim Vilfort had to deal with the greatest of pains.

Yes, life can be wonderful and wicked. 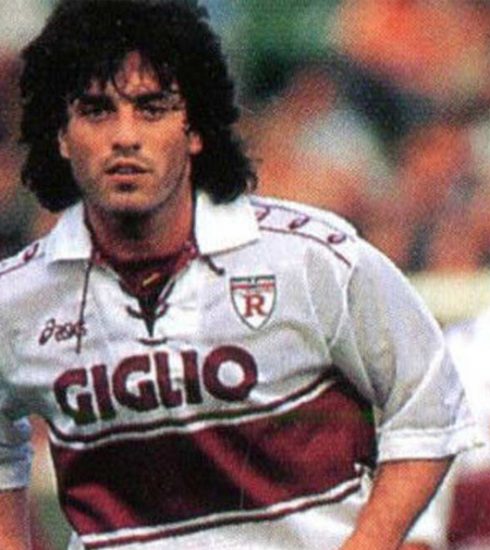 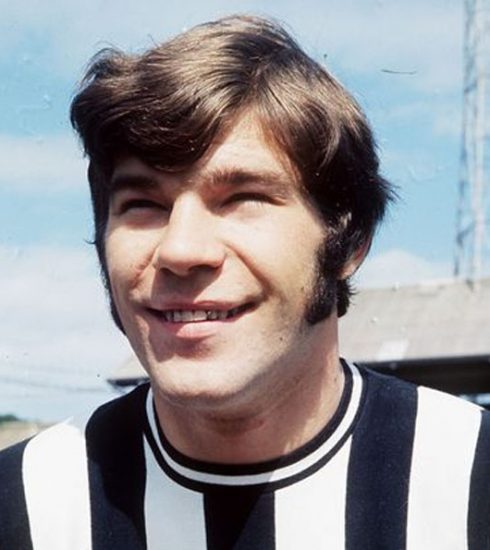 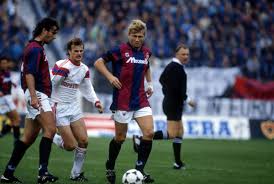